I answered some of my own questions. Original information is below but now I just need to know:

Can I somehow set a call queue to route in the following way:

Basically, I want it to sequentially call two people - if neither is available, it'll just call the whole office simultaneously.

I'm not super familiar with the RC system, so I thought it best to ask if a plan I have is possible before trying to implement it.

I'd like to take a big database of contacts that we have and create forwarding rules for each of the contacts.
Each of the contacts is assigned to one 'account manager'. There is also a backup manager for when the account manager is on leave.
Ideally, when a known contact phoned us, the call would forward to the account manager. It would also 'know' when that manager wasn't available and instead forward the call to the backup manager. In the worst case where neither were available, no forwarding could occur (or whole manager group rings, as we have it currently).

I know it is possible to create rules within the API to redirect calls from specific numbers to particular extensions. The issue comes when detecting if someone is available. How would this behave when putting the phone on DND? Would I somehow be able to create a rule that says:

Can the API 'see' when a phone is on DND? I'm concerned it doesn't and would just go to voicemail on the first phone.

Another solution that may work would be to not have any phones on DND but instead:

Any advice or alternative solutions with regards to this would be much appreciated. Particularly with how the API treats DND phones and how intelligent rules can be.

Having done some more searching, I seem to have answered some of my question:
I think I'll have to create call queues to achieve this.
From my investigation, if I create a call queue with the Account manager and then the backup manager (sequentially), then I can set a custom rule to redirect calls from certain numbers to said queue.
If the account manager is set to DND, it will route directly to the backup.

Call queue is kind a for sharing a phone number with a big group. So instead of calling each agent's direct number, a customer can just call the call queue's number and the system will route the incoming call to the queue members, either rotating or simultaneously until a member of the queue picks up the call, or the call will end up in a voicemail or is forwarded to another extension (agent) or even to another call queue.

What you asked from the original question "to take a big database of contacts that we have and create forwarding rules for each of the contacts." was a different use case. To me, this is a direct call to each of the contacts, and each contact has it own route, from an account manager to a backup manager as you explained. For this, I don't think that it is suitable for call queue solution.

I recommend you to check and learn if user call handling is good enough for your use case. Login to your account web service, select a user, then open the Call Handling section and setup how incoming call should be handled (see screenshot).

Alternatively, you can implement a more sophisticated program to handle incoming call with your own condition. You can browse the API reference and implement the following steps

+ Add the user telephone session event filters to receive events when there is incoming calls to an agent's phone number.

2. Use the call control API to forward the call accordingly.

Thank you for getting back to me.

You said: "the call will end up in a voicemail or is forwarded to another extension (agent) or even to another call queue."

So is there a way to forward a call from one call queue to another?

Actually, that is not such a precise situation. But you can set the "Wait settings" to forward the call to another call queue. See the screenshot 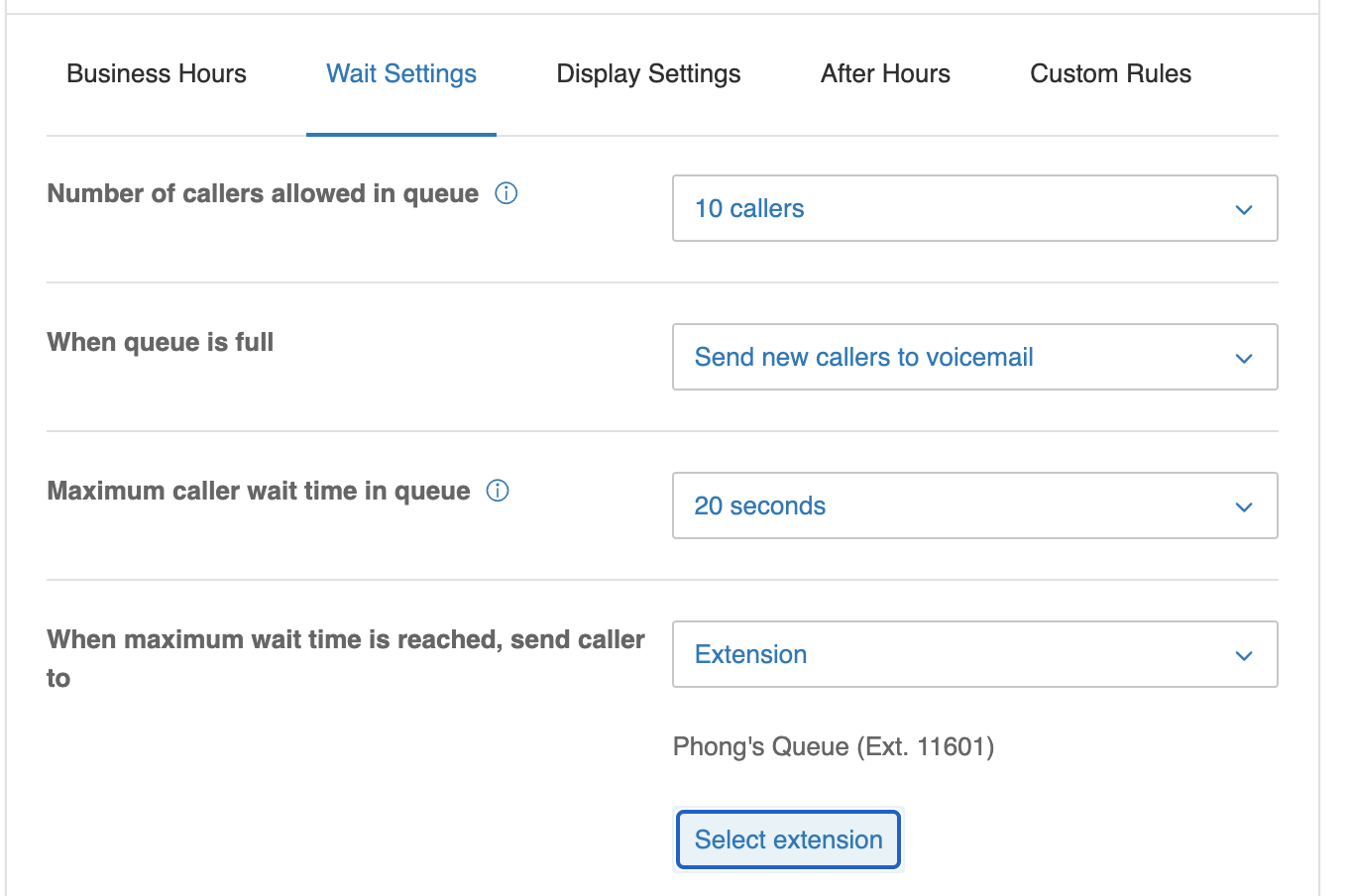 I just set up the system with call queues and it works as intended.
We only have 5 account managers so it's very easy to set up the queues with the backup. 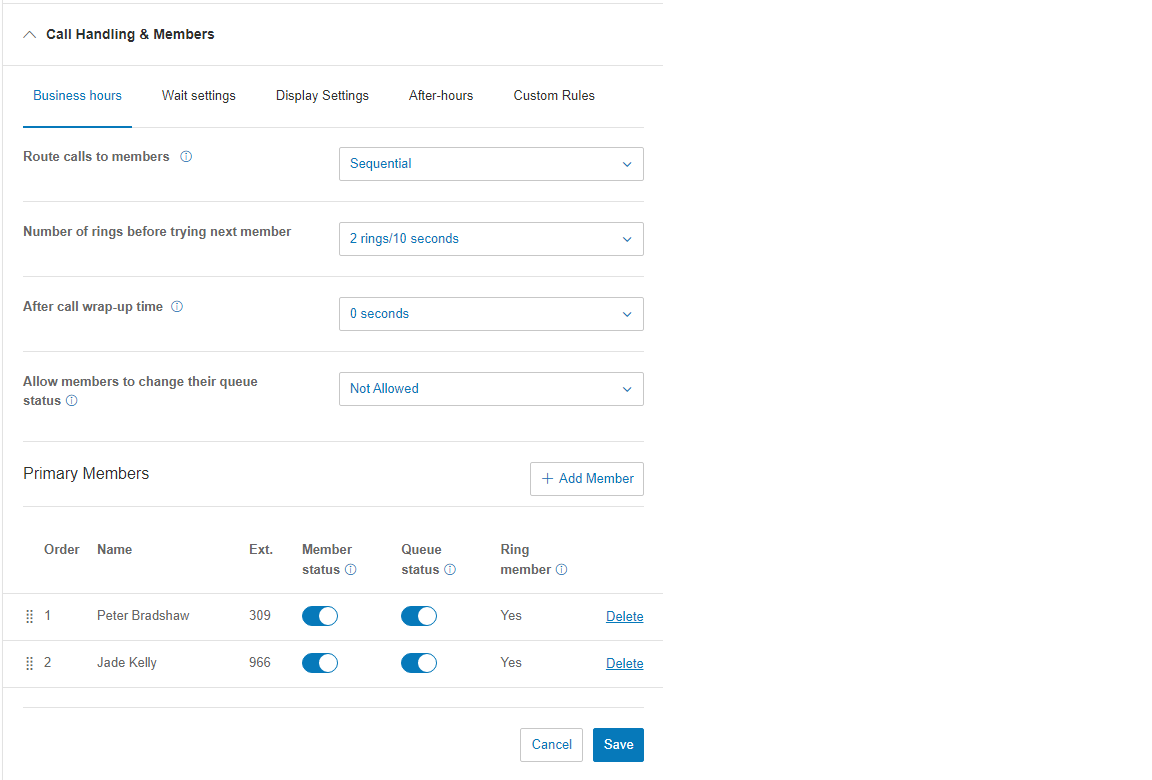 Then, on your advice, set up wait settings to 'Not wait' and to forward to another queue (which is just our whole office). 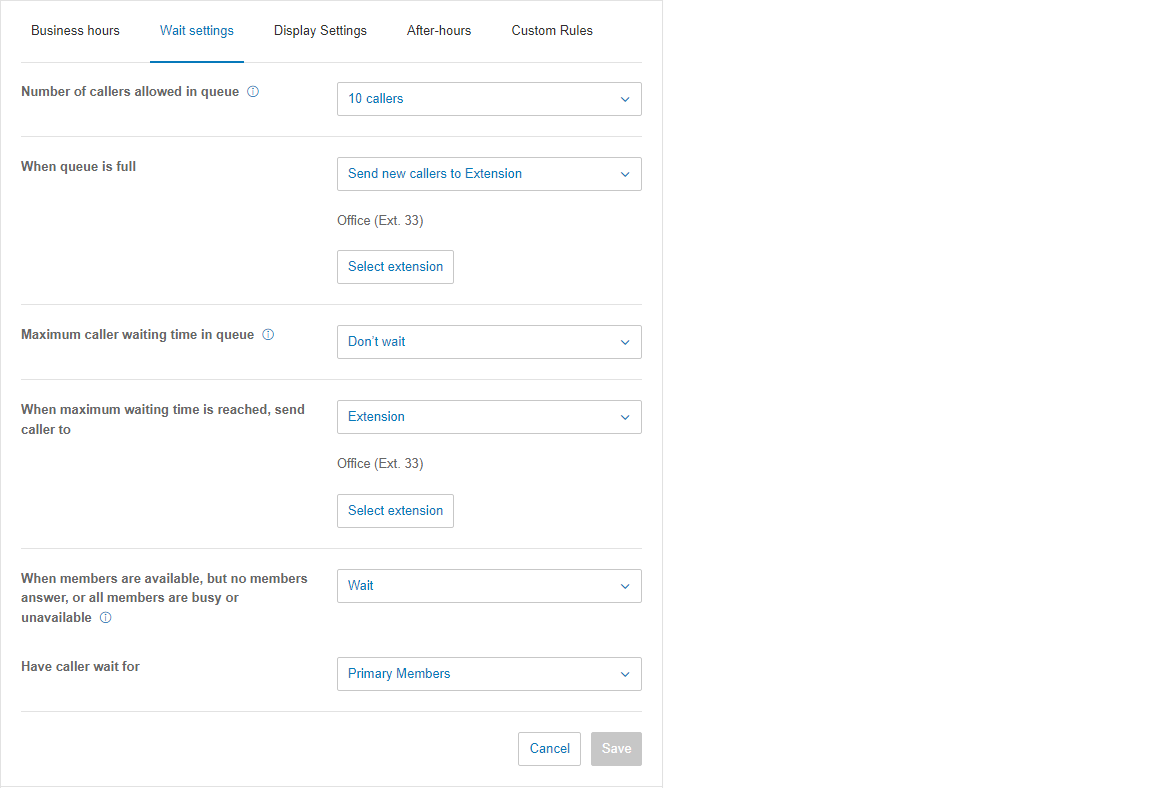 This means that certain contacts are forwarded first to the account manager, then to the backup and finally to the whole office if neither are available.

I now just have to make a program to do API calls and create a bunch of custom rules for all of our contacts.

Thank you for your help.

Using the RingCentral Phone for Desktop, you can dial or receive test calls, send and receive test SMS or Fax messages in your sandbox environment.

Tip: switch to the "sandbox mode" before logging in the app:

7 People are following this question.

Is it possible to set 'Forwarding Numbers' through API?

How many external numbers can I forward calls from an Extension?

How to obtain forwarding number list for making RingOut calls through API?