Forwarding call queue to IVR instead of voicemail

I have a customer who wanted four staff members phones to ring simultaneous on incoming calls to their main number so I have set them up with a call queue. At times during the day the four staff members maybe on other calls, in meetings or away from their desks; when this happens I currently have it forwarding to the voicemail of one of the members as they don't seem to check the voicemail on the extension of the call queue. My customer has asked if calls go un-answered in the call queue could it be sent to an IVR instead of a mailbox, that way the caller might be able to reach the person they are looking for or at least leave a message in their mailbox instead of a general mailbox? I have tried to set up the overflow option in the specific call queue, have it flow to another call queue that I have called Overflow and then in the Overflow call queue added a custom rule to send it to the extension of the IVR. The only problem is that RC won't allow for the agents calls to be set at simultaneous only sequential or rotating which the owner is adamant the have all four phones ring at the same time.

Does anyone know a way that I could make this work?
call queues
Comment
· 5 comments

michel5476 commented · Jul 30, 2020 at 04:47 AM
Yes, sorry I forgot to mention that for this work-around, we use a normal user extension for our call queue - does not have all the extra call-queue settings, but simultaneous ringing and forwarding back to the IVR using the "Connect directly to a Group" are available then.

tis-admin commented · Apr 30, 2020 at 01:51 PM
Thanks for the reply Michel. This is at the User level, would it not allow for messages left on that extension if a call came from the IVR directly to that extension or is someone called their DID?
0 Likes 0 ·

This seems like a very common scenario for small businesses: Ring phones first, then if no one answers, send to the main auto-attendant. It's unfortunate that the only way to accomplish this is through a "duct-tape" solution like the one described above. RingCentral really should allow Call Queues to redirect to any extension type we want - user, group, IVR, etc.

It's in there now - they need to ask their Rep to add the 'Call Queue to Extension option' - and it'll be on the pull-down under the Wait Settings tab: 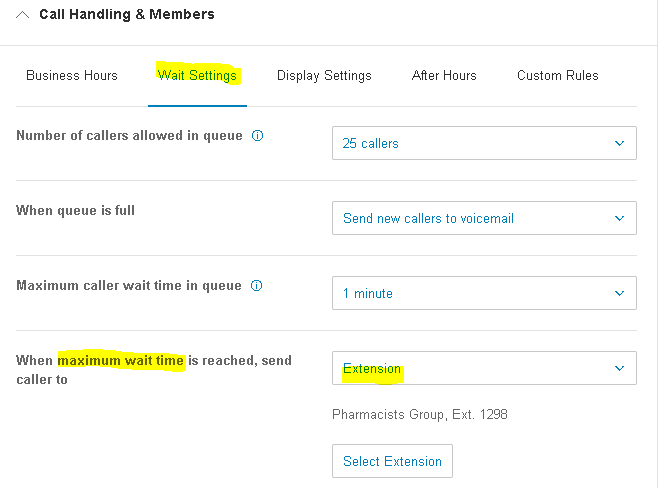 This works for the user during office hours but after hours the option to route to a group is not avaialble. any ideas?

michel5476 this works but after hours doesn't have that option. Any ideas?

michel5476 answered • Apr 30, '20
Yes, it is just not very obvious, but this is how to do this:
- under the "Messages" section, unselect the "Enabled" check box so that messages are not taken
- set the "How to handle missed calls" to "Connect directly to a Group"
- press the "Select Group" button and select your IVR extension from the list.

8 People are following this question.

as part of a call queue and I am on a call - I cannot see other calls coming in and may need to answer those - is there a way to correct?

how to add a call queue as a forward