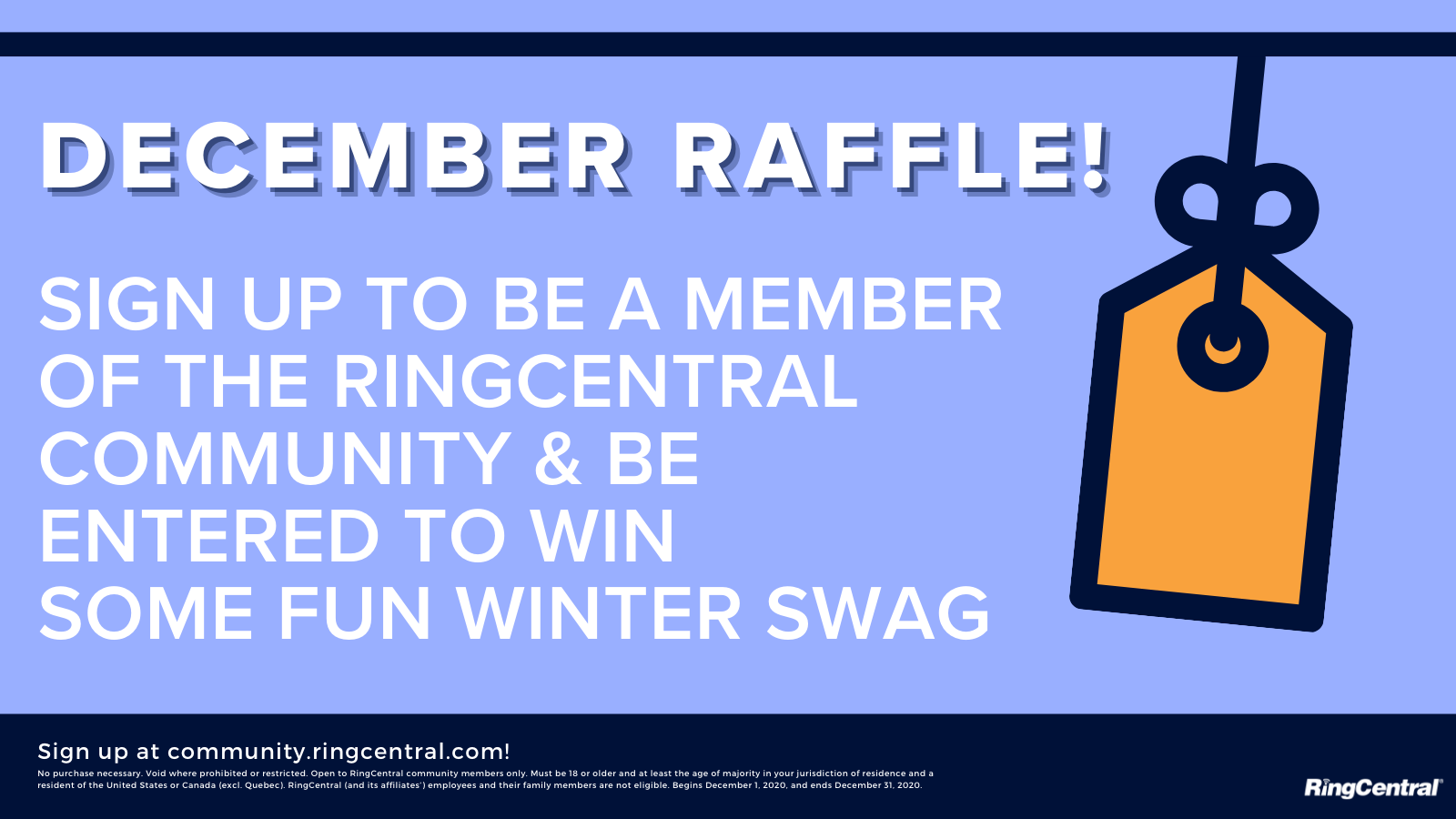 No purchase necessary. Void where prohibited or restricted. Open to RingCentral community members only. Must be 18 or older and at least the age of majority in your jurisdiction of residence and a resident of the United States or Canada (excl. Quebec). RingCentral (and its affiliates’) employees and their family members are not eligible. Begins December 1, 2020, and ends December 31, 2020.

PLEASE BE ADVISED THAT YOU HAVE NOT YET WON. NO PURCHASE OF ANY KIND IS NECESSARY TO ENTER OR WIN. A PURCHASE WILL NOT INCREASE YOUR CHANCE OF WINNING. VOID WHERE PROHIBITED.

The December 2020 New Community Member Sweepstakes Promotion (the “Promotion”) is sponsored and administered by RingCentral, Inc. (“RingCentral”), 20 Davis Drive, Belmont, CA 94002. The Promotion is governed by these official rules (“Official Rules”). By participating in the Promotion, each Entrant as defined below) agrees to abide by these Official Rules, including all eligibility requirements, and understands that the result of the Promotion, as determined by RingCentral or its agents, are final in all respects.

3. How to Enter: To obtain entry in the Promotion, as determined by RingCentral in its sole discretion, the Entrant must: (1) create a user profile at community.ringcentral.com during the Promotion Period(the “Entry”). Entrant may only submit one Entry during the Promotion Period. Any attempt by any Entrant to obtain more than the stated number of Entries will void those Entries and that Entrant may be disqualified. Offer is non-transferable. Use of any automated system to participate is prohibited and will result in disqualification.

RingCentral is not responsible for: (i) lost, late, delayed, damaged, unintelligible, illegible, misdirected, incomplete or garbled Entries; (ii) those who cannot access or complete the Entry; (iii) any issues associated with hardware, software, telephone, Internet, virus contamination, network, human error, electronic malfunctions, or any other technical problems; and/or (iv) delay, failure or malfunction of any kind relating to the Promotion. Incomplete or corrupted Entries are void and will not be accepted. To be eligible, Entries must be received prior to the end of the Promotion Period. All Entries become the sole and exclusive property of RingCentral.

RingCentral will attempt to notify the winners notified by email or other contact method. RingCentral is not responsible for any delay or failure to receive notification for any reason, including inactive email account(s), phone numbers, technical difficulties associated therewith, or a Winner’s failure to adequately monitor any account. Should a Winner fail to promptly respond to RingCentral, RingCentral reserves the right to disqualify that Winner and, in its sole discretion, select a new one in another random drawing. If a selected Winner is deemed ineligible, for any reason, the Entry will be disqualified and an alternate Winner may be selected, in RingCentral’s sole discretion. RingCentral is not responsible for and shall not be liable for late, lost, misdirected, or unsuccessful efforts to notify Winners.

5. Odds: Odds of winning are based on the total number of Entries received.

6. Prize: The Winner who is selected and deemed eligible will receive one RingCentral branded fleece blanket and RingCentral branded stickers (as solely determined by RingCentral in its sole discretipn) (the “Prize”). Approximate retail value (“ARV”) for each Prize is $25.00 USD. ARV for all Prizes is $25.00 USD. No substitution, assignment or transfer of the Prize is permitted, except by RingCentral, who has the right to substitute a Prize with another of comparable or greater value. Maximum of one (1) Prize per Entrant during the Promotional Term for this Promotion. The Winners will be responsible for paying all costs and expenses related to the Prize that are not specifically mentioned. In order to claim their Prize, Winner may be required to complete an Affidavit of Eligibility/Release of Liability/Assignment of Rights/Publicity Releases (where legal) (the “Release Documents”) and W-9 or similar tax form, which must be executed and returned to RingCentral, or Winner will forfeit Prize and another Winner may be chosen in RingCentral’s sole discretion. Specific Prizes are issued through Tango Card Inc and subject to issuers gift card availability at the time of Entrant’s redemption. RingCentral, Inc. is not affiliated with or endorsed by Tango Card Inc. Awards subject to issuers additional terms and conditions. Prizes awarded to residents of the US or Canada may differ.

7. Conditions of Participation: By submitting an entry for this Promotion, you agree to abide by and be bound by these Official Rules and any decision RingCentral makes regarding this Promotion, which RingCentral shall make in its sole discretion. RingCentral reserves the right to disqualify and prosecute to the fullest extent permitted by law any Entrant or Winner who, in RingCentral’s reasonable suspicion, tampers with RingCentral’s site, the entry process, intentionally submits more than the permitted number of entries, violates these rules, or acts in an unsportsmanlike or disruptive manner. ANY ATTEMPT BY AN ENTRANT OR ANY OTHER INDIVIDUAL TO DELIBERATELY DAMAGE ANY WEBSITE OR UNDERMINE THE LEGITIMATE OPERATION OF THE PROMOTION MAY BE A VIOLATION OF CRIMINAL AND CIVIL LAWS AND SHOULD SUCH AN ATTEMPT BE MADE, RINGCENTRAL RESERVES THE RIGHT TO SEEK DAMAGES FROM ANY SUCH ENTRANT TO THE FULLEST EXTENT PERMITTED BY LAW, INCLUDING ALL ATTORNEYS’ FEES.

9. Privacy Policy: Entrant information submitted for this Promotion will be collected and used in accordance with RingCentral’s Privacy Policy, which can be found at http://www.ringcentral.com/legal/privacy-policy.html, subject to the other provisions of these Official Rules.

10. DISCLAIMER AND LIMIT OF LIABILITY: RINGCENTRAL MAKES NO REPRESENTATIONS OR WARRANTIES OF ANY KIND, EXPRESS OR IMPLIED, REGARDING ANY PRIZE OR YOUR PARTICIPATION IN THE PROMOTION. BY ENTERING THE PROMOTION OR RECEIPT OF ANY PRIZE, EACH ENTRANT AGREES TO RELEASE AND HOLD HARMLESS RINGCENTRAL, RINGCENTRAL ENTITIES (AS DEFINED ABOVE), (COLLECTIVELY, THE “RELEASED PARTIES”) FROM ANY AND AGAINST ANY CLAIM OR CAUSE OF ACTION, INCLUDING, BUT NOT LIMITED TO, PERSONAL INJURY, DEATH, OR DAMAGE TO OR LOSS OF PROPERTY, ARISING OUT OF PARTICIPATION IN THE PROMOTION OR RECEIPT OR USE OR MISUSE OF ANY PRIZE. THE RELEASED PARTIES ARE NOT RESPONSIBLE FOR: (1) ANY INCORRECT OR INACCURATE INFORMATION, WHETHER CAUSED BY ENTRANTS, PRINTING ERRORS OR BY ANY OF THE EQUIPMENT OR PROGRAMMING ASSOCIATED WITH OR UTILIZED IN THE PROMOTION; (2) TECHNICAL FAILURES OF ANY KIND, INCLUDING, BUT NOT LIMITED TO MALFUNCTIONS, INTERRUPTIONS, OR DISCONNECTIONS IN PHONE LINES OR NETWORK HARDWARE OR SOFTWARE; (3) UNAUTHORIZED HUMAN INTERVENTION IN ANY PART OF THE ENTRY PROCESS OR THE PROMOTION; (4) TECHNICAL OR HUMAN ERROR WHICH MAY OCCUR IN THE ADMINISTRATION OF THE PROMOTION OR IN THE PROCESSING OF ENTRIES; OR (5) ANY INJURY OR DAMAGE TO PERSONS OR PROPERTY WHICH MAY BE CAUSED, DIRECTLY OR INDIRECTLY, IN WHOLE OR IN PART, FROM ENTRANT’S PARTICIPATION IN THE PROMOTION OR RECEIPT OR USE OR MISUSE OF ANY PRIZE.

If for any reason an Entrant’s entry is confirmed to have been erroneously deleted, lost, or otherwise destroyed or corrupted, Entrant’s sole remedy is another entry in the Promotion, provided that if it is not possible to award another entry due to discontinuance of the Promotion, or any part of it, for any reason, RingCentral, at its discretion, may elect to hold a random drawing from among all eligible entries received up to the date of discontinuance for any or all of the prizes offered herein. No more than the stated number of prizes will be awarded. In event that production, technical, programming or any other reasons cause more than the stated number of prizes as set forth in these Official Rules to be available and/or claimed, RingCentral reserves the right to award only the stated number of prizes by a random drawing among all legitimate, unawarded, eligible prize claims. RingCentral reserves the right to cancel, amend or suspend the Promotion at any time, with or without prior notice, including if the Promotion encounters any unexpected problems.

11. Choice of Law; Disputes: This Promotion and these Official Rules are governed by, and will be construed in accordance with, the laws of the State of California, and the forum and venue for any dispute arising out of or relating to these Official Rules shall be in the Northern District of California. Any and all disputes, claims, and causes of action arising out of or connected with the Promotion, or any benefits received, or the administration of the Promotion not resolved through internal adjudication shall be resolved individually, without resort to any form of class action, and exclusively by arbitration, to take place in the State of California pursuant to the Rules of the American Arbitration Association, then effective, (2) any and all claims, judgments and awards shall be limited to actual out-of-pocket costs incurred, including costs associated with participating in the Promotion and in no event shall Entrant by entitled to receive attorneys’ fees or other legal costs; and (3) under no circumstances will an Entrant be permitted to obtain awards for and participants hereby waive all right to claim punitive, incidental and consequential damages and any other damages, other than for actual out-of-pocket expenses, and any and all rights to have damages multiplied or otherwise increased.

12. No Affiliation with Third Parties: This Promotion is sponsored and administered exclusively by RingCentral and is in no way sponsored, endorsed, administered by or associated any other third party.

Congratulations to our winners! @Cynthia Beverly 125 @Erin Gould @Joe Cache @Rod Neal all joined the Community in December. We can't wait to see all of our new members in and about the space.

We'll be holding new member raffles quarterly, with our next raffle being held for all new users joining in April!

Yay! Thanks for your participation in the Community and for joining us here!

3 People are following this article.

How to Ask a Good Question

Need to submit a developer help ticket? Our new online form can help!

RingCentral Blog: Our Top Innovations of 2021 and What's Coming in 2022